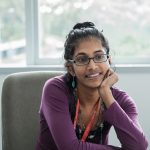 Sujatha Arundathi Meegama is an Assistant Professor of art history at the School of Art, Design, and Media at Nanyang Technological University in Singapore. Prior to joining NTU, she worked as a museum educator at The Art Institute of Chicago. She is the editor of Sri Lanka:Connected Art Histories (Mumbai: Marg Foundation, 2017). Her research has been published in Artibus Asiae and most recently in the volume, Sri Lanka at the Crossroads of History (London: University College London Press, 2017). Her current research interests range from ivories to roadside shrines to the digital humanities. She holds a BA from Temple University Tokyo, an M.A. in East Asian Studies from Stanford University, and a Ph.D. in History of Art from the University of California, Berkeley.

Around the mid-1500s, Albrecht Dürer’s, The Bagpipe Player (1514), found its way to Sri Lanka, where the Portuguese had established diplomatic contact in 1506 with the king of Kotte, to conduct trade in cinnamon. This print was appropriated by a sixteenth-century Sri Lankan carver in an ivory casket, the “Robinson Casket,” that now resides in the Victoria and Albert Museum in London. Previous scholarship has framed them as diplomatic gifts and luxury export objects for Renaissance kunstkammers; we have learned a lot about their famous collectors, and the reworkings of European prints on them have also received scholarly attention. However, terms such as “copies” or “reproductions” dominate the art historical discourse concerning the period, ascribing a derivative nature to such complex objects produced in different regions of the world during some of these earliest artistic encounters with Europe; and in this discourse, the European collector, artist, print, and subject matter become the protagonists.

In contrast, this paper shifts attention to a different set of frameworks: to the makers of these objects of encounter—the anonymous Sri Lankan ivory carvers, in their responses to European prints and in their role as cultural translators. A close analysis, locating the visual response carved in this casket within wider South Asian visual traditions, suggests that these ivory carvers were also active agents of transformation: their responses should be understood not simply as “copies”; but rather, as providing a significant perspective on appropriation, and the transfer of artistic knowledge between early modern art worlds.