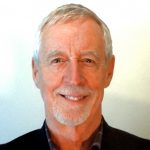 William R. Sargent is an independent curator, and former H. A. Crosby Forbes Curator of Asian Export Art at the Peabody Essex Museum (1978-2009). He has presented over 300 lectures on Asian export art around the world. His publications include The Copeland Collection: Chinese and Japanese Ceramic Figures (1991), Views of the Pearl River Delta: Macao, Canton and Hong Kong (1996), Treasures of Chinese Export Ceramics at the Peabody Essex Museum (2012), and Chinese Porcelain in The Conde Collection (2013).  Currently he is also a Senior Consultant in Chinese Art with Bonhams (USA).

Luxury goods from India that reached the European continent by the mid-sixteenth century included gems, crystal and ivory carvings, mother of pearl, and other goods.  By the time of the colonization of India by the Portuguese in the early sixteenth century and British traders in the early seventeenth century, the arts produced in port cities of India developed to accommodate the needs of new, present, and non-native, customers.  Trade goods now included textiles, furniture, silver, and paintings created to meet a new set of needs and standards of taste.

Among the first to respond to the British presence was a Chinese modeler in Madras who created a series of five documented unfired clay portrait figures of European traders between 1717 and 1721.  Three are known with inscriptions and dates identifying the artist as “Amoy Chinqua.” The first European reference was recorded by Joseph Collett (1673-1725), a merchant and administrator of the English East India Company in Sumatra.  He was Governor of Bencoolen, Sumatra, 1712 to 1717 and President of Madras, 1717 to 1720.

His figure and another four, some of whom can be identified, create a visual picture of European officials and traders in India, and reflect the life styles adopted by some of them.  While these few figures reflect only a moment in the history of the arts in port cities of the Indian Ocean, they were harbingers of a style of life that would be pursued by traders ever since.  How the effects of living in a port city were transferred back to Europe are examined through the individuals depicted.