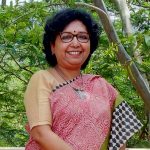 「 Bharukachchha from the 10th to the 13th Centuries CE: Transformation from a Premier to a Secondary Port 」

Ports are a kind of human settlement where both land and water are integral to the life of the people living there. The distribution of the ports along the coast does not depend only on the advantageous geographical position. The nature and function of each port is determined by its relation to its supply zone or production center. The western sea board of India was dotted with numerous ports among which the ports of Gujarat played a central role in all the periods of history. This presentation would focus on Barygaza/Bharukachchha which has the longest history of all the ports in the west coast of India. In spite of its ubiquitous presence in almost all books/essays on Indian Ocean trade network, the history as well as dynamics of this port remains to be fully explored at least for the period between the tenth and the thirteenth century. The entry point to the study of this port is obviously the Periplus of the Erythraean Sea/Periplus Maris Erythraei (mid first century CE). It continued to be a major port in the early historic period, experiencing a phase of silence in the subsequent years. With the rise of Caulukyas and the development of maritime activity, the trade at Bharukachchha revived. However, it remained a secondary port with Cambay taking the role of a premier port. With a range of varied sources, the presentation would focus on the period of its consolidation and further try to understand its presence in the context of the rise of another port i.e. Cambay.