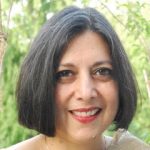 Mishi Saran is an author of The Other Side of Light (HarperCollins India, 2012), which was shortlisted for the 2013 Commonwealth Book Prize. Her travel book-cum-memoir, Chasing the Monk’s Shadow: A Journey in the Footsteps of Xuanzang (Penguin, 2005), was shortlisted for India’s 2006 Hutch Crossword Book award and long listed for Germany’s Lettres Ulysses Award for the Art of Reportage. Saran’s short stories have won prizes and been broadcast on the BBC. She is writing a novel set in Shanghai. She returned to Hong Kong in 2014 after a decade away. Saran is fluent in Mandarin, French and Hindi.

In 1904, a Parsi gentleman, one Mr. Bejan Dadabhoy Tata set foot in Shanghai, China in the service of a trading company run by Ratanji Dadabhoy Tata, a cousin of India’s tycoon, Jamshedji Tata. The Shanghai traveler settled down, brought back a Parsi wife from India and had five children. Mr. B.D. Tata did well enough to build his own house on the western edge of the French Concession. When his Indian parent firm had to liquidate their assets B.D. Tata chose to stay on in Shanghai and sign contracts himself with the two textile mills he worked with. Who was this Mr. Tata? How did he come to be in Shanghai? What was his life like? How did the Parsis live? Where did they socialize and worship? These are the questions my presentation will answer. The Parsis, we shall see, were a visible and significant portion of Shanghai’s Indian community: a diverse and vibrant body that included Sikhs mostly serving in the British police force, Sephardic Jews from Mumbai, Bohra Muslims and Sindhis. While these communities had distinct, separate circles, their lives intersected and overlapped.  The history of Indians in Shanghai will be the subject of an illustrated anthology edited by Mishi Saran and Zhang Ke, forthcoming in the summer of 2018.