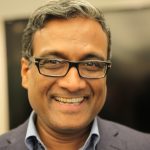 Krishnendu Ray is an Associate Professor and Chair of the Department of Nutrition and Food Studies at NYU. He is the author of The Ethnic Restaurateur (2016, Bloomsbury) and The Migrant’s Table: Meals and Memories in Bengali-America Households (2004, Temple University Press). He co-edited Curried Cultures: Globalization, Food and South Asia (2012, University of California Press). He is currently the President of the Association for the Study of Food and Society which is an international consortium of academic Food Studies programs.

The basic tools of modern cultural history and demographics have become so nationalized that they have repressed the centrality of connections between neighboring territorial regions of Asia and among port cities of the Indian Ocean, linked through flows of knowledge, material culture, and palatal preferences. This presentation theorizes cultural identities that go beyond the boundaries of nation-states, both spatially and temporally. In recovering literal taste, it violates the academy’s ontological assumptions of superior bodies and high-mindedness that has trivialized food, cooking and eating. The world of taste and trade in comestibles opens a window into the space between and below nations. When we examine the edges and intersections of continents and territories we begin to see how narratives of cultural difference rub up against the reality of shared tastes, culinary ingredients and technologies. Within and across Asia, a new history of oceans and renewed visibility of transnational circulation is reinvigorating discussions of cultural domains that exceed the nation-state.