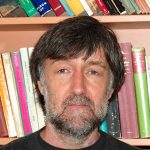 Gwyn Campbell is a Canada Research Chair In Indian Ocean World History. Born in Madagascar, he grew up in Wales where he worked as a BBC radio producer in English and Welsh. He holds degrees in economic history from the universities of Birmingham and Wales and has previously taught in India (Voluntary Service Overseas) and at universities in Madagascar, Britain, South Africa, Belgium and France. He also served as an academic consultant for the South African Government in the first phase of inter-governmental meetings leading to the 1997 formation of an Indian Ocean regional association.

Director of McGill’s Indian Ocean World Centre, Gwyn Campbell is a specialist in the economic history of the Indian Ocean region. A former collaborator on the sub-Saharan Africa team of the National Geographic and IBM’s Genographic Project (2005-2010) that did research into early human origins and migrations, he is currently undertaking research into slavery, migration and diasporas in the Indian Ocean world, as well as investigating the foundations of the Indian Ocean world “global” economy. He also has a strong interest in the dynamics of minority cultures, imperialism, globalisation and third world development.

He is currently completing a manuscript on Africa and the Indian Ocean world from early times to 1900, which will appear in the Cambridge University Press New Perspective on African History series, and has recently published a book, David Griffiths and the Missionary “History of Madagascar,“ as part of Brill’s Studies in Christian Mission series. Among his other interests are painting, poetry and prose.

In the keynote lecture, Professor Campbell will present the different structures and functions of ports in the Indian Ocean world (IOW) in the context of the rise and development of the IOW global economy from about 300 BCE to the present day. He will examine the physical, geographical and environmental requirements of a port, and how ports evolved, changed and transformed over time catering to intra-IOW regional maritime exchange, trans-IOW maritime exchange, and exchange between the maritime and continental spheres of the IOW. Professor Campbell’s lecture includes  investigation of the relationship between ships, commodities and ports, and the European impact on IOW ports from circa 1500.