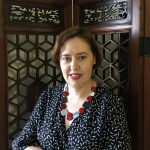 Donna Brunero is a Senior Lecturer in the Department of History, NUS. She researches and teaches in the areas of maritime and imperial history. She is currently co-editing a volume on Empire in Asia: the Long Nineteenth Century (Bloomsbury) which is a product of the Department of History’s Empire in Asia project. Her most recent publication is on maritime ethnography “To Capture a Vanishing Era: The Development of the Maze Collection of Chinese Junk Models, 1929-1948” Journal for Maritime Research, Vol 17.1, 2015.

「 From the Deck of a Ship: East India Company Accounts of the Asian Maritime World in the Early 1800s 」

This presentation considers the observations and experiences of East India Company ‘travellers’ as they moved between in ports in Asia and sometimes journaled their observations of port cities and port communities. This presentation draws on a variety of British EIC journals such as an EIC cadet’s 1824 voyage on the Lady Campbell and an EIC-wife’s travels along the Indian coast, as a means of exploring how the Asian maritime world was experienced, and viewed from the deck of a ship, while voyaging throughout Asia. Often a visit to a port led to new acquisitions, from fruits to pets, plants and other goods; these encounters with the material culture and communities of ports arguably shaped shipboard experiences. (This paper focuses on travels in the declining era of sail as steam brought profound changes to ports and port cities and the way that people moved across the oceans.)

While it is undeniable that many travelogues and observations of Asian ports exist from early Chinese and Arab accounts, such as Wang Dayuan and the travels of Ibn Battuta, to the European observers – such as the recently translated writings of Jacques de Coutre – what this presentation asks is what can EIC accounts from ‘the deck of a ship’ add to our understanding of the early modern Asian port city? What were some of the main observations of Asian ports and their communities during the period in which the ‘great colonial ports’ of the age of high imperialism emerged? This paper aims to builds a richer understanding of how conceptions of port cities, their communities and commodities were shaped in the 1800s, and how a vantage point of the sea can bring a fresh perspective to the Asian port city.