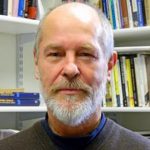 David Ludden is Professor and Chair in the NYU Department of History. He received his Ph.D. in History from the University of Pennsylvania, in 1978, and served on the Penn faculty from 1981 until 2007. He chaired South Asia programs at Penn, the Social Science Research Council, and Fulbright Senior Scholars program (CIES). In 2002, he was President of the Association for Asian Studies. His research focused on southern India, until the 1990s, when he moved his work into Bangladesh and northeast India. His publications include four edited volumes, three monographs, and over 50 academic articles and chapters, whose overarching theme is the comparative history of capitalism and the long-term spatial processes of globalization, particularly in agrarian settings and as they concern inequality, poverty, conflict, and social movements. He is now completing a book entitled Global Asia: Making Space for Modernity, which covers the history of globalization in Asia into the age of industrial capitalism.

「 Cowry Country and the Inland Port of Sylhet 」

Sylhet was an inland port of trade, in the classical sense, described by Karl Polanyi, long before it became even a small city in far northeast Bengal, with the arrival of the railway, in 1900. For many previous centuries, it was a port floating in a perilous landscape filled with floods, fishing, rice farms, and small boats carry goods on routes connecting the Indian Ocean with mountain forests in Assam, Burma, and Yunnan. The cowry shell was the only coin in that commercial space. Shiploads of cowries came annually to Bengal, from the Maldives; small loads travelled river boats to Sylhet; and then, ascended the hills, in return for mountain goods for people in the plains. East India Company District Records provide a clear picture of the cowry country environment that gave rise to the port of Sylhet and disappeared as the old port became a modern city.